While the natural gas market is shrinking in Lithuania, the development process of the market moves in opposite direction. It is obvious, that till now historically country‘s natural gas market was depended only on one external supplier, but today the offers of other countries natural gas suppliers‘ become relevant and are already accessible for Lithuanian market participants. Energy independence as one of country’s strategic priorities of economic development is unanimously highlighted by both market participants and energy and economic experts, local and regional politicians. Lithuania now implements two projects, which are important not only for Lithuania but also for entire region, these projects will allow not only for Lithuania, but also for other Baltic countries to purchase gas on the global natural gas markets. The first of these is the LNG terminal project implemented by AB Klaipėdos Nafta (it is planned to be launched in December 2014), second is Gas Interconnection Poland-Lithuania, called GIPL implemented by AB Amber Grid (it is planned to be launched in 2018). Exactly these two projects will irreversibly change the value chain of natural gas industry of Baltic region, from concentrated and due to technical limitations dependent only from one gas source gas market to fully integrated gas market, creating much more choices.

The value chain of natural gas industry consists of many important and complex processes, by grouping them it is possible to identify three main blocks: Production, Transmission and Distribution. Transmission process compared to LNG delivery process (liquefaction of natural gas, transportation with gas vessels and regasification) technically is quite different, but by its function (gas transportation over long distances) is pretty similar to the transmission. For this reason, in the following scheme of the value chain, mentioned process is added to the Transmission block. After the LNG terminal and GIPL projects will be implemented this will expand Transmission block and access to a wide range of new natural gas sources will be created. 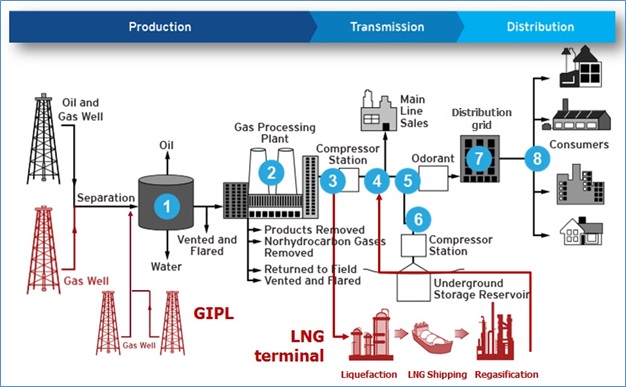 At the moment Lithuania has enough capable gas interconnection with Latvia, which able to transmit more than 6 million cubic meters of natural gas per day in both directions. Latvia has connection with Estonia, which lets to fulfill Estonian gas needs even on peak periods. It means that access to the Lithuanian LNG terminal and by this to the global LNG market is created to the neighboring countries as well. In order to use the maximal capacities of LNG terminal, it is needed to expand the capacities of Lithuanian transmission system in the section between Klaipėda and Kuršėnai, this project is being implemented by AB Amber Grid (it is planned to be commissioned until the end of 2015). Implementing this project AB Amber Grid can get the EU financial support. The financial support can be given by the European infrastructure network funding measure, this could significantly reduce the impact of the project to the transmission tariffs.

After Lithuanian LNG terminal will be commissioned and the possibility to purchase gas from other source will be present, the natural gas exchange will become even more important instrument to purchase the unforeseen needs of natural gas or to sell the surplus volume of natural gas, as well as the convenient instrument for balancing the portfolio of suppliers or consumers natural gas flows. The products traded on the gas exchange of GET Baltic create equal rights to operate on the market for both small and large market participants, this minimizes the barriers to enter the market for new market participants and creates favorable conditions for the development of competition.

Not only Lithuanian but Latvian and Estonian natural gas exchange participants, registered on the exchange of GET Baltic, will be able to purchase gas delivered via LNG terminal. Gas exchange is the place where the spot natural gas price is settled on the market. The factors affecting the price can be various, for example it can depend on the weather temperature, the maintenance works on the transmission system, changes of certain participants’ gas needs or other reasons. In Lithuania, in certain cases when the surplus of natural gas arises, the price on the market can be lower than in other Baltic countries and this creates favorable incentives for the neighboring market participants to purchase gas from Lithuania. Of course there can be other scenario, when the neighboring market participants has the surplus of natural gas and by selling gas in Lithuania can result favorable price and additional gas flows for Lithuanian participants. Natural gas exchange is the most convenient and reliable place for fulfilling such transactions.

“An integrated and well-developed infrastructure is the base for sustainable development of the market. The natural gas transmission system operators of the region countries create incentives for growth and development of the market, by working together and studding the needs of the market and the future scenarios. The level of competition in the market is possible to define by many different parameters and indicators, but the most important is the number of participants in both supply and demand sides. It is likely that over the next 4-5 years Lithuania will become an important transit country between Western Europe and Baltic region on a Europe natural gas map. Arising new opportunities will strengthen gas position in the region. Natural gas is clean and probably the most convenient to use fuel. At the moment natural gas is losing its position in the competition with other energy source. However the new tendency of natural gas price of the last months, increasing activity of market participants on the natural gas exchange, ambitious energy projects being implemented in Lithuania and the new opportunities that will be present in upcoming years show optimistic signals” – the situation commented Haroldas Nausėda the CEO of GET Baltic, UAB.